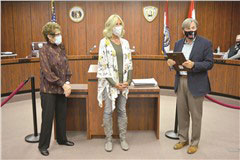 The City of Jackson Board of Alderman discussed the potential cost to replace the Mary Street low-water bridge to include sidewalks during its meeting Oct. 5.

During study session, the Board was given an engineering proposal from Cochran to replace the low-water bridge in the City Park and add sidewalks on both sides of the bridge.

Board Member Katy Liley said she would want sidewalks on both sides of the bridge, as crossing at the bridge would not be as safe for pedestrians.

“I understand it is a lot of money,” City Administrator Jim Roach said. “It’s a lot of impact to the neighborhood to construct it, but this is a one-time opportunity for a project that’s going to uplift that adjacent neighborhood, and it should last 100 years.”

The project would take about a year to construct after the design is finalized. Roach said they have discussed constructing the bridge in 2022, but the design could be completed earlier.

Roach added that the Board could wait to see if grant funding becomes available.

“I think we have time,” Roach said. “I would rather everybody be comfortable and we get this right, … rather than rush into something.”

• Water tower lease: The Board discussed a potential lease agreement with Cape Girardeau County for the County to use the north water tower for a dispatch communication antenna.

The County will have increased communication throughout the county, and the County will install additional cables and antennas for the City to use. Mitchell said he has read the lease agreement, and it is a good deal for the City.

The County will install the antenna on the tower, as well as fund and construct a building at the water tower to hold equipment. “All we have to do is give them some place to put the building and run some power to it,” Mitchell said.

Obergoenner said they have reached out for quotes from Anthem, Aetna, National General and Auxiant, a third-party administrator. He said one of the options from Auxiant would only include SoutheastHEALTH and not Saint Francis Medical Center. Board Member Paul Sander said he would not be in favor of a plan that only included Southeast-HEALTH locally.

Obergoenner said he would only recommend Auxiant’s plan excluding Saint Francis if it provided significant savings for the City. He added that he should have the quotes and a recommendation at the next Board meeting.

• New city streets: The board approved the creation of Old Bethel Lane and Wanda Lee Way.

Old Bethel Lane, which previously was a private drive, is off of Lee Avenue and leads to the historic Old Bethel Church. Old Bethel Church was the first non-Catholic church west of the Mississippi River and was restored in 2007.

Wanda Lee Way runs between Birk Lane and East Jackson Boulevard, near Center Junction. The land where the new street is located was donated to the City by the Drury family and is named after their mother. Wanda Lee Way was also designated as a truck route.

“We couldn’t operate without those who serve on our various boards that we have,” Mayor Dwain Hahs said. “They do this without compensation and many times without a lot of ‘thank you’s.’”

• Sewer project change orders: The Board approved a change order of $273,406 to Jokerst, Inc. related to the first phase of the Williams Creek Sanitary Sewer Extension Project. The additional expenses were mostly due to additional rock removal and moving the sewer farther away from the creek. The original contract price for the project was $1.3 million.

In addition, the Board approved a change order of $2,638 to SAK Construction for their work on the 2020 Sanitary Sewer Lining Program that was finished last month. The change order request was due to more feet of liner being cleaned, inspected and lined than estimated. In addition, a few lines required additional cleaning prior to the installation of the liner. The original contract price for the project was $97,488.

In addition, the northbound and southbound traffic stops on Wedekind Street at the intersection with East Jackson Boulevard will be removed. A yield sign will be added in its place.

• No parking areas: The Board approved new no parking designations for three city streets. Parking will no longer be allowed on the west and south sides of Jona Gold Court, on the south side of Cortland Drive and on both sides of Wanda Lee Way.

The Board had previously discussed rezoning three properties at the intersection of East Jackson Boulevard and Hilltop Drive that were zoned residential but were commercial in use (Swinford & Associates, Lee Chiropractic Center and Senior Health Care Benefits).

After further review, 11 properties were proposed to have zoning changes in the area, including three homes on Clover Drive that are currently zoned industrial, three properties on the East Jackson Boulevard that have split zoning and two properties on Hilltop Drive that are now inconsistent with surrounding zoning.

The Planning and Zoning Commission will study the proposal, hold a public hearing and return a recommendation to the board. Affected property owners will be contacted.

• Appointment: The Board approved the mayor’s appointment of David Seabaugh to the Park Board, filling an unexpired term ending May 2021.

• Vacate public alley: The Board discussed a request to vacate a public alley in Weltecke’s Addition. The 130-foot-long alley currently extends from Elm St. to the rear property line of 213 North Union Ave. A public hearing is expected to be set next meeting for Nov. 2.

Rodney Bollinger, director of administrative services for the City, said the 20-foot-wide alley is unused by the City and there are no objections from City staff to vacate the alley. He added that it dates back to the 1896 and would most likely be divided to the adjacent properties, if terminated.

• Electronic recycling: The Board was given the renewal agreement with Midwest Recycling Center (MRC) to continue the City’s electronic recycling services contract. The City has had a contract with MRC for the last five years to recycle electronic consumer byproducts on a daily basis and at the city’s annual E-cycle event.