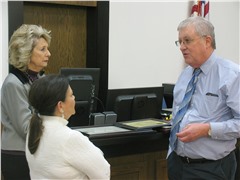 It has been 24 years since Gary Kamp first donned his black robe to serve as associate circuit judge in Division 3, but “It seems like yesterday,” he said last week.

Kamp retired Dec. 31. He was honored at two retirement parties on Thursday; one in his courtroom in the Jackson courthouse in the afternoon and one later that evening.

When he was young, Kamp didn’t dream of sitting on the bench ruling over court cases.

“I originally thought I wanted to be an engineer,” he said. However, after two weeks of taking calculus at Southeast Missouri State University, he saw his chances of reaching that goal was hopeless. There was still time to drop calculus and take a history class instead, so he did.

Kamp worked his way through Southeast, taking a double major in history and political science, and a double minor in English and accounting.

Surprisingly, Kamp said he used his accounting training more than the others after he became a judge. He often had to study financial statements in law cases that came before him.

After SEMO, Kamp went to law school. He applied to a number of schools, but when he was accepted to his first choice, Mizzou, he looked no further.

Kamp went into private practice as an attorney with Kenneth Shrum in 1978. He served as the city attorney for Marble Hill and as assistant prosecuting attorney for Bollinger County.

Kamp said he “had a good law practice,” but it forced him to work 55 to 65 hours a week and he missed spending time with his children, who were then ages 3 and 4.

In 1994 he had the opportunity to run for associate circuit judge in Division 3, a job that offered a 40-hour week with weekends free.

He ran for the office as a Republican against Democrat Gary Robbins, who was a public defender, and won. He was surprised that the first case that came before him as a new judge involved Rob-bins as a defense attorney.

Over the years, Kamp has taken great satisfaction in knowing that he was helping people. He looked out for the general welfare of the citizens of Cape Girardeau County, but he balanced that with protecting the rights of the accused. These are the two obligations of a judge, he said.

Kamp strove to do things right. He didn’t even want to give the appearance of impropriety. For example, he never entered the courtroom at the same time as the attorneys so that it might look as if he favored one side or the other.

He has handled a variety of cases, but 90 percent were criminal. It was frustrating to see some defendants come back to court time after time and never change their ways.

On the other hand, Kamp takes great satisfaction when defendants learn their lesson and never come back.

He remembers one case that happened “early on.” A young man stole a motorcycle and was charged with a felony. His dad brought him in to talk with the judge and with Morley Swingle, who was the prosecutor at the time.

The dad told them that his son needed some direction. He wanted to join the U.S. Marines, but if this felony went on his record, he would not be able to join. Swingle agreed to defer prosecution.

“We kept our fingers crossed that we did the right thing,” Kamp recalled.

A year later, a Marine in full dress uniform showed up in Kamp’s office to thank him for the chance he had been given. He was promoted to the U.S. Embassy in Berlin, which was a very important position. “He really excelled,” Kamp said.

The victim in this case was “made whole” as the stolen motorcycle was recovered undamaged. Everything worked out for the best. “Those are the kind of things that make you feel really good,” said Kamp.

“The ones you like are the ones you give two years probation to and you never hear from them again (because they don’t repeat their mistake). We have a lot of cases like that,” Kamp said.

The three most memorable cases Kamp presided over were those of Timothy Krajcir, Clay Waller and Russell Bucklew.

Krajcir was a serial killer who was convicted in 2007 based upon DNA evidence of murders he committed in the late 1970s and early 1980s. Kamp spoke to Krajcer in person and “He seemed remorseful,” Kamp said. “He was relieved he had gotten the burden off his chest.”

When Kamp presided over the Krajcir case, he heard from people all over the country. His case made headlines in newspapers all over America because Krajcir was a serial killer.

Clay Waller was a former Cape County deputy who murdered his wife, Jacque, and buried her body near the Mississippi River in Illinois.

“It’s extremely difficult to prosecute a murder case without a body,” Kamp said.

Waller eventually agreed to divulge the location of the body to avoid the death penalty.

Bucklew murdered the new boyfriend of his former girlfriend in front of her and her children. He later escaped jail and went after her and her mother before being caught.

“He was the most coldhearted, unforgiving person I’ve ever seen,” Kamp said. “I’ve seen a lot murder cases come through here — it’s approaching 50 — but I’ve never seen anyone meaner.”

There were some things that got under Kamp’s skin as a judge. He disliked it when attorneys were not prepared for court. He tried to keep noise down, so he and everyone else could hear what was said. And he believed in promptness.

“I’ve always tried to start court on time,” he said. “It’s a courtesy to the lawyers and is respectful to people who show up for court,” Kamp said. Promptness shows that he is taking things seriously. On the other hand, “some lawyers are habitually tardy,” Kamp complained.

“He presented the idea of video conferencing for prisoners where they didn’t have to be walked up to the courtroom from the jail. In addition to the safety aspect, it saved time and money of the attorneys and judge.”

Kamp also reduced the time it took for a preliminary hearing to take place by 20 days. That saved the County money because it didn’t have to house prisoners in jail during those 20 days. If you multiply the cost of housing those prisoners (using the state reimbursement rate of $22.50 per day) by the 14,000 to 15,000 preliminary hearings Kamp held during his 24 years, he saved the County more than $7 million, Jones said.

During his afternoon retirement party, Kamp received formal recognition for his service from the Missouri State Supreme Court, both houses of the State Legislature and from the Cape County Commission.

Kamp offers no advice to Frank Miller, who replaced  him as of Jan. 1. “I’m kind of blessed in that my successor practiced in this Division for three years [as an assistant prosecutor],” Kamp said. “He and I have had several conversations. I’ve had my time to make my mark. It’s up to him to do things his way. I’m confident he’ll do an excellent job.”

Looking ahead, Kamp plans to “do a little bit of traveling” with his wife, Gail, who recently retired as a CPA.

Kamp has no interest in opening up a law office, but he may serve as a “senior judge” who is assigned certain cases from time to time by the chief justice of the State Supreme Court.

As a senior judge, he will be able to keep his mind sharp and continue to go to state training. But he will no longer receive calls at night and on weekends to sign warrants, as he has done for the past 24 years.