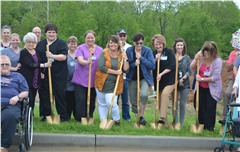 The Villas of Jackson broke ground on a new memory care unit near the existing facilities on Broadridge Drive in Jackson.

Construction on the new building is scheduled to be completed in 18 months to two years, according to Villas of Jackson Marketing Director Christie Mason.

“We are already getting phone calls asking when this will be open,” Mason said.

The new facility will house 18 studio apartments, along with resident amenities including an activity room, a full kitchen and a dining room.

“It’s going to be a locked facility, and it’s going to run independently from the existing Villas with its own activities and a completely separate staff,” Mason said.

Mason said one of the reasons they plan to open this facility is the lack of memory-care specific facilities in the area.

“There is one in Ste. Genevieve, but between Cape and Saint Louis, that’s it,” Mason said.

Administrator Carl Knott said the $3.2 million facility was a risk for the organization, but they decided to move forward with the project because it filled a need in the community.

“We have people now who we would move in there and we already have people who are on a waiting list,” Knott said.

He added that the new facility will be able to provide more specialized and one-on-one care than they can at the current facility.

“The ratio of residents to staff will be really high,” Knott said. “We are only going to have 18 residents over there, and there’s going to be an average of five staff members there at any time.”

For more information on the Villas of Jackson or the new facility, call 573-986-8210 or visit thevillasofjackson.com.