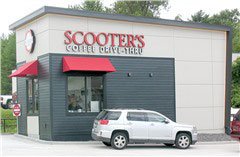 Jackson will get a new coffee shop this month.

Jackson residents Bart and Keri Vandeven plan to open Scooter’s Coffee at 601 E. Jackson Blvd. sometime before September. The drive-thru only restaurant is located next to Town House Inn, just a stone’s throw away from the intersection of Highways 25, 61 and 72.

“We’re both from Jackson. We wanted to be in Jackson,” Bart said. “We felt that the closer we could be to that [intersection], the better. We wanted to be close to the [high] school, too. A lot of the adults there drink coffee.”

Scooter’s Coffee is a franchise chain similar to Starbucks or Dunkin’ Donuts. “We’re the fourth biggest chain,” Bart said. Based out of Omaha NE, Scooters Coffee shops are “mostly out west,” Bart said. Like the other chains, it sells its own brand of coffee, in this case called Scooter’s Coffee.

If coffee isn’t your thing, don’t despair. There are other beverages, such as tea, smoothies, ice-based blends and Red Bull Infusions. And to take away those morning hunger pains, there are a variety of breakfast food items, including breakfast sandwiches, bagels, muffins, various breads (including iced lemon bread) and huge, homemade cinnamon rolls.

If you want cookies to dip into your coffee, try some “Scooter Doodle” or chocolate chip cookies.

Customers may download the Scooters app, which lists all the menu items and offers $2 off the first order.

Although many fast-food restaurants are drive-thru only because of the COVID-19 pandemic, Scooter’s Coffee is drive-thru by design. “It’s the new wave,” Bart said.

Bart is originally from Leopold, but he moved here in 2001. Keri, who is the owner/operator of the store, is a Jackson High School graduate. They will employ 15 people.