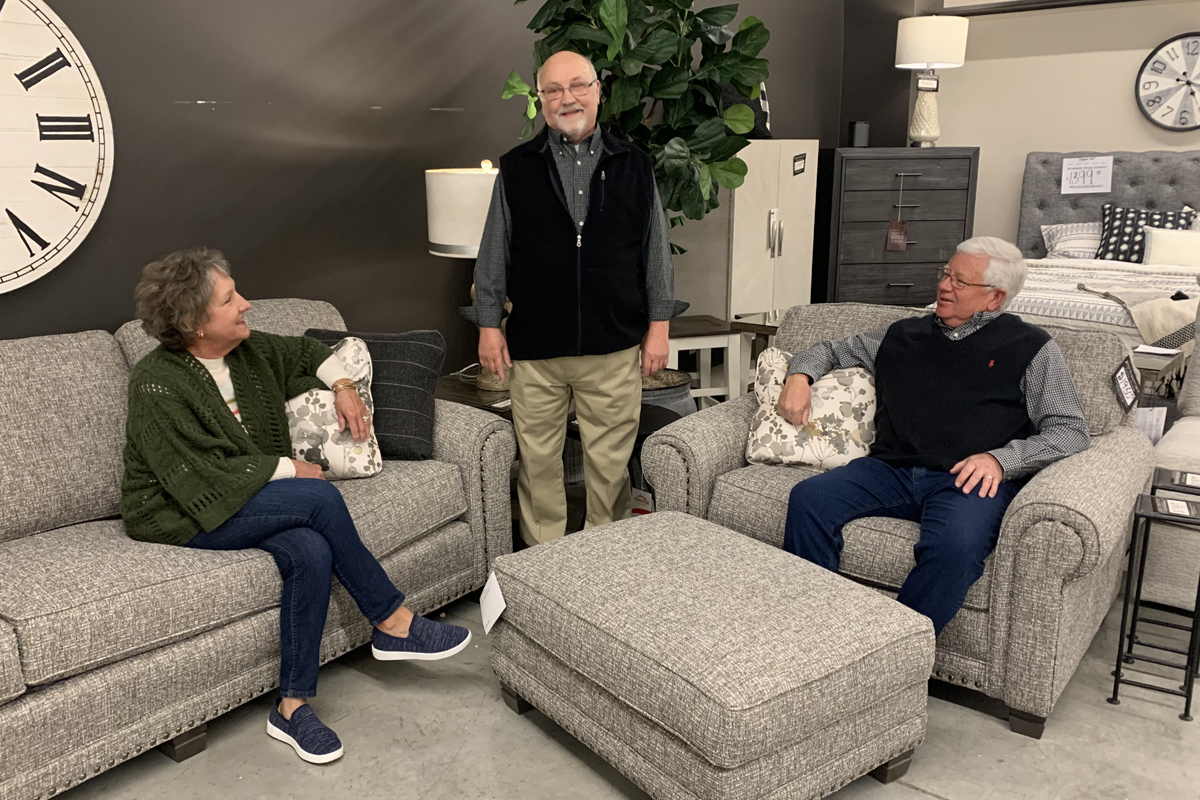 Eddie Ross visits with Marilyn and Don Brown of Jackson. The Brown's were the first customers at the former Uptown location of Ross Furniture in 1979 and have been purchasing items ever since. Mr. Brown went to school with Ross and then worked next door to Ross Furniture at Jackson Rexall Drugs for several years. Photo by Denise Kinder

After 40-plus years in the furniture business, Ross Furniture and Bedding Owner Eddie Ross has decided to officially retire. Beginning his career in September of 1979, Ross stepped away in March of 2020 to “test the waters.”

“You can’t have two chiefs in the day-to-day activity and Adam (Ross) was doing such a good job that I felt very comfortable to walk away from the day to day,” he said.

Friends and shoppers who are accustomed to seeing Ross in the store and working with him for over 40 years should not worry about any changes coming to the family-owned business.

“Things will not change. Customers won’t know that I’m gone other than my pretty face won’t be here,” Ross said with a chuckle.

Ross still maintains ownership of Ross Furniture and visits the store several times a week, but he has not participated in sales since his retirement.

“I don’t keep up enough to help out on the sales floor,” he said. “I go to my office or sit and chat with my previous customers and still enjoy that a lot.”

Before becoming owner of Ross Furniture, Ross was presented with several opportunities along the way, which led him to the helm of the furniture store.

Ross fell in love with sales while working at Roziers Department Store. He then was offered the assistant manager position at P.N. Hirsch Department Store before he took a job on the road selling baby pictures and Bibles.

After a couple years selling on the road, Ross received word Brennecke Chevrolet was looking for a car salesman.

“Garland Powell and Jim Moore gave me every opportunity to grow,” Ross said. “They taught me a lot about running a business. The talks I had with Garland were probably the most valuable, and we became very close.”

Ross made his transition into the furniture world with his father, Charles. He said some of his favorite memories come from the early years of working alongside his father, watching the business grow and the close relationship they developed.

Being able to move into the Perryville market and trying other business ideas was one such example of their partnership that allowed the store to grow. “We saw each other’s strengths and we divided responsibilities and that worked really well,” Ross said.

Ross saw a friend from that past when former boss’s son, Jeff Moore, approached him to go to work at Ross Furniture.

“After I bought dad’s part out after 15 years, I gave Jeff (Moore) the opportunity to achieve some ownership in the company,” Ross said.

Moore was with Ross Furniture 15 years before his passing in 2007. After Moore passed away, Ross was looking for someone to manage the Jackson location of Ross Furniture. His son, Adam Ross, assured him he could handle the responsibility at just 20 years old.

“He promised me he would get his college degree and it took him eight years, but he did it while managing the Jackson store,” he said. “I thought it was quite the accomplishment doing both. He is a worker and put the time in and has done a great job.”

Fifteen years later, Adam is still managing Ross Furniture and has taken over the day-to-day operations in his father’s retirement.

“Adam has done great throughout the pandemic, kept ordering and supply coming,” Ross said. “This is why I know I can put my trust into him.”

Since bringing Adam and his wife, Michaelyn, into the family-owned business, Ross is very pleased with the working and personal relationship the family members have kept, adding it can be difficult when in business together.

After spending over 40 years in an industry, Ross has seen several changes and the business has adapted over the years to continue to deliver quality furniture since 1979.

In the early years, Ross said 95 percent of products were domestic and then China slowly became a supplier of some items.

“We tried to stay out of imports, but it’s impossible today,” he said. “Most wood products are imported, and we can do upholstery furniture and mattresses domestically, although it will have imported components.”

Ross has seen major companies go out of business, including local manufacturers in Cape Girardeau, due to economic downturns and no longer being able to compete. “Many of the major brands today are not the quality they use to be – if they are even still around,” he said.

When shopping for new lines, quality and price point are examined because Ross said it’s disappointing that you can’t depend on a name anymore.

“There is still good quality furniture out there,” Ross said. “You just have to depend on the dealer you trust, and we hope that’s us.”

He also said Ross Furniture has always prided themselves on not overpricing items to later discount them, so customers would believe they were getting something for nothing.

“If it’s 70 percent off, the item has to be way overpriced to do that,” Ross said. “There are no guidelines on retail pricing like there use to be.”

When reminiscing over the past 40 plus years, Ross said one of his fondest memories comes early on while Ross Furniture was located in Uptown Jackson and he was heavily involved with the Merchants Association.

“A lot of those stores are gone, but I miss the meetings and comradery of all the merchants in Uptown since leaving in 2017,” Ross said.

When thinking back to 1979, Ross said the vision of the store has exceeded what he anticipated – especially with the opening of Furniture Finds in Cape Girardeau and separating the bedding store into its own entity as Missouri Mattress.

“Adam is looking all the time at ways to expand and spread out,” he said. “I’m comfortable with the way it is, but we will see what the future brings. I’m sure there will be other markets involved.”

Since his official retirement in 2020, Ross has been spending time with his grandchildren, Charlotte and Everett, and watching them a couple days a week.

He is also looking to travel more with his wife, Brenda, but it has been difficult with the pandemic.

“I do appreciate everybody who has shopped with us and hope you continue to do so,” Ross said. “Adam has been trained well and we have a great sales staff – they will take great care of you.”

If you would like to stop in and congratulate Eddie Ross on his retirement and visit with him, stop by Ross Furniture from 5-8 p.m. on Friday, March 25. Food and drink will be available and lots of Retirement Specials on in stock items!

* This article was written by Denise Kinder of Ross Furniture for the CBJ’s Progress Edition.

Written By The Cash-Book Journal