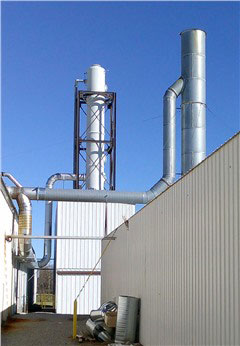 You might be checking out the latest cat video or funny meme on Facebook when you stumble across an ad that catches your eye. A picture of smokestacks belching clouds of white smoke into blue sky is accompanied by a headline screaming, “Toxic Ethylene Oxide Has Been Found in Jackson, Missouri.”

Curious, you read further. The ad, placed by a law firm, states that the U.S. Environmental Protection Agency (EPA) has identified high emissions of EO in Jackson. EO is a carcinogen, and The EPA has found Jackson residents are at an increased risk of cancer, the ad claims.

The alleged source of the contamination is a Jackson company, Midwest Sterilization Corp., the ad states. The company uses EO to sterilize medical equipment and supplies.

You may wonder if your air is safe to breathe. Wonder no more. EO emission is not a problem in Jackson.

The scary numbers of pounds of EO being emitted into the atmosphere are not actual numbers that were observed or detected by sensors. They are “worst-case scenarios” that were reported to the EPA many years ago. Actual amounts were not that high, and emissions have improved since then.

Representatives from the EPA and Midwest Sterilization spoke to the Mayor and Board of Aldermen during the study session Dec. 2.

Cody Brown of EPA explained that his agency created the National Air Toxics Assessment as a “screening tool” for state, local and tribal air agencies. NATA’s results helps these agencies identify which pollutants, emission sources and places they may wish to study further to better understand possible risks to public health. It was never meant to be used to give precise exposures and risks to specific people.

The EPA uses assumptions that are “overestimates,” when creating the NATA, Brown said. The risk is based upon exposure to toxins 24/7 for 70 years. “No one sits on their front porch for 70 years, 24 hours a day, seven days a week,” he admitted.

And yet, the NATA map on the EPA Web site shows a big blob over Jackson, indicating a higher risk of EO emissions.

“It’s important to note that higher risk now does not mean there is more of this compound in the air or in the places we’ve seen it before,” Brown stated. “We’re not saying that emissions of ethylene oxide are rising. We actually believe they are falling.”

As a two-pronged response to the higher risk indicated by NATA, the EPA has strengthened existing rules to control emissions, and the EPA is working with state and local agencies to identify sources of EO emissions.

In May 2018, EPA conducted an inspection of Midwest Sterilization, one source of EO in Missouri. “During that inspection, we found full compliance with all permits issued by the State of Missouri and the federal standards that Midwest is subject to,” Brown stated.

Multiple meetings and phone calls have taken place between the EPA and Midwest Sterilization since then.

“As a result of all this engagement and their own initiative, Midwest has voluntarily committed to purchase and install new control devices to reduce emissions below what is currently required,” Brown said. “Again, we’re not asking them to install these devices, or requiring them to — neither is MDNR [the Missouri Department of Natural resources]; they are choosing to do that.”

Improvements made by Midwest are estimated to have lowered EO emissions by 87 percent, Brown said. Already, 5,767 pounds of EO have been reduced to 1,215 pounds, and further improvements will take that below 300 pounds.

“In summary, Midwest Sterilization is in full compliance with all permits in the State of Missouri and with all EPA standards,” he said.

Ben Washburn of EPA emphasized that the Jackson facility is in full compliance with all permits. In addition, Midwest took corrective action and invested a significant amount of money (about $2 million) completely voluntarily.

“There was no enforcement hearing we were threatening over them; there was nothing that was required of them to do. They did that completely on their own. The thing I think is real key about that, is that it’s not something we see often times from a lot of companies. That says something about Midwest Sterilization: their willingness to invest a significant amount of money, despite the fact they were already in compliance.”

Karen Fitzpatrick, president and owner of Midwest Sterilization, said her company is committed to making sure the environment is safe. Her company provides an important service: sterilizing medical devices. Her company sterilizes about 40 percent of all sterile procedure trays in the U.S. “So if you have a surgery, there is a pretty good chance that it may be sterilized by a Jackson company,” she said.

“We do everything from cotton balls to lifetime implantable devices [such as pacemakers or ocular lenses for cataract surgeries],” Sisk said.

The pallets of medical devices are preconditioned with warm, moist air to make a nice environment for microorganisms to reproduce, Fitzpatrick explained.

Then, through a lengthy process that takes several days, up to 28 pallets of equipment are placed in large airtight chambers. (There are three chamber sizes; the smallest holds 10 pallets.)

A vacuum removes the air from the chamber and “nitrogen washes” remove any traces of oxygen. Then ethylene oxide gas is injected into the chambers. EO molecules are so small they permeate through all of the packaging material to kill any bacteria, mold, spores, fungus, germs, etc., that may be on the medical equipment. The equipment is sterilized without opening the packages.

The EO is removed from the chamber using a vacuum and nitrogen washes. The gas passes through a wet acid scrubber that converts it to ethylene glycol that can be used for the manufacturing of antifreeze. This scrubber is 99 percent efficient in removing EO from any emissions produced by the Jackson plant. A second scrubber has been added that increases the efficiency to 99.999 percent.

It’s hard to get every last bit of the EO out of the packages of medical devices. So the pallets are placed in an aeration room where the product is heated and the air is changed multiple times an hour. Any remaining EO is lifted out, and the air from those rooms is scrubbed of EO before being released into the environment. Midwest is in the process of developing a way to scrub that air a second time.

EO in low levels is not something to be feared. It is already in the environment. It is manufactured in our bodies. It can be found in car exhaust and created by decaying vegetation.

“It’s naturally occurring and there are other sources of ethylene oxide that are out there. The point is, people are exposed to it whether we’re here or not,” said Fitzpatrick. “We’re committed to makings sure any EO they’re exposed to is not coming from us. That’s our goal. We’re trying to be the best corporate citizens we can possibly be. We love Jackson. Jackson is just a great place.”

Midwest Sterilization was started by two Procter and Gamble employees who wanted to sterilize diapers for babies who were born prematurely. Fitzpatrick’s parents bought the company in 1984. At that time, it was located in Cape Girardeau. The company moved to Jackson in the early 1990s. It currently employs about 70 people.