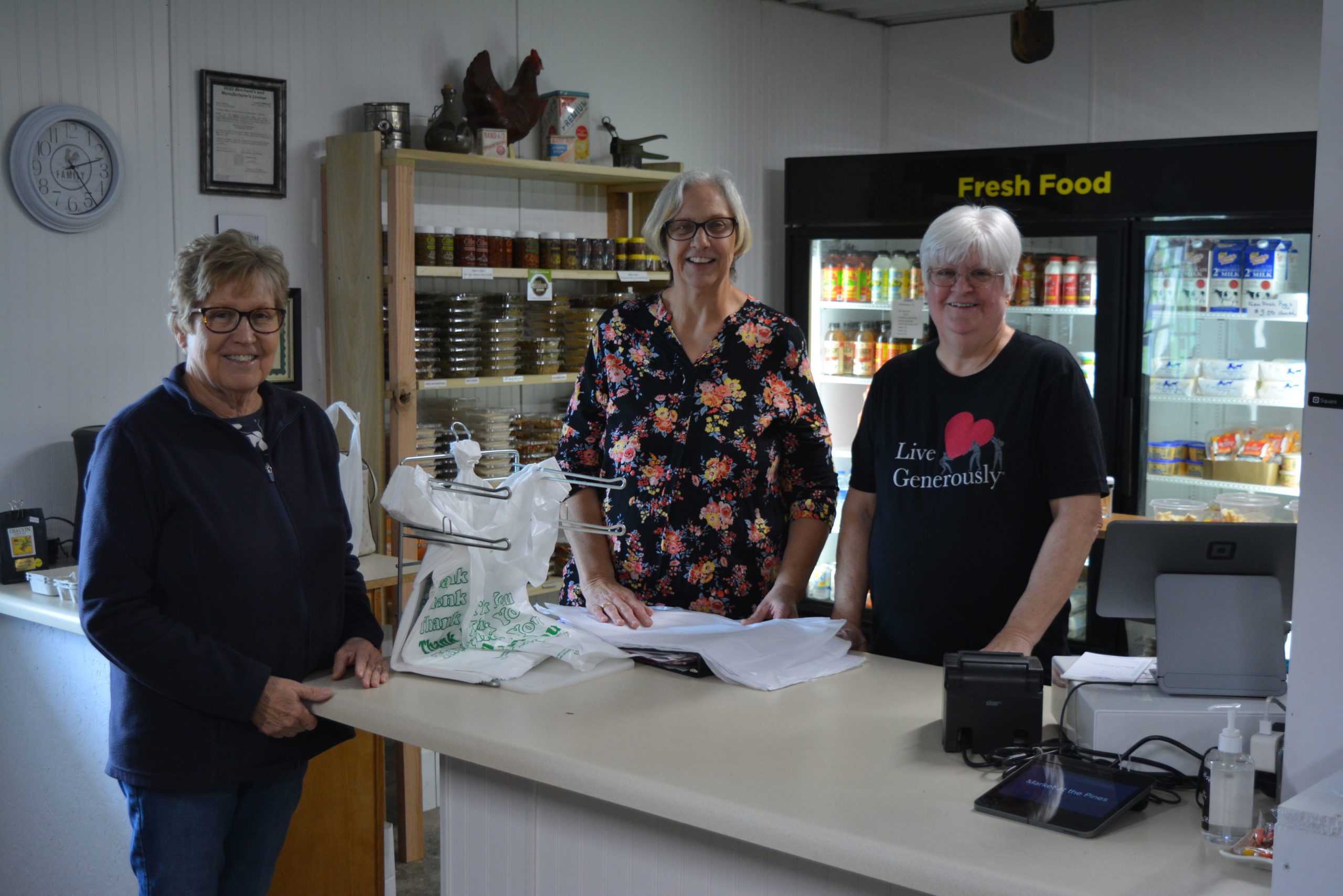 Market at the Pines, a specialty grocery store, opened in Jackson last month as an addition to Meier Horse Shoe Pines, a Christmas tree farm owned by Teresa and Steve Meier.

The new store, which is located next door to the farm’s Christmas shop, held its soft opening on April 23 and has been open every Tuesday through Saturday since. “Everybody has been really excited to come in and they have all been amazed about how much stuff we have in the little store,” Teresa Meier said.

“Most of our stuff comes from a company in Pennsylvania called Dutch Valley Foods,” Teresa Meier said. “They bring together a lot of Amish foods and send it to us in 50 or 30 pound bags. We then reprocess everything and put it into smaller containers.”

In addition to snacks like pretzels, crackers, chips and chocolates, Meier said they offer local farm products including snack sticks from Reis Meats in Pocahontas. The store also has staple baking supplies such as flours, sugars and yeast, as well as smaller baking mixes.

“We have what I call ‘shortcut cooking,’” Meier said. “We have cookie and brownie mixes where all you have to do is add water, and we have soup mixes that work basically the same way. They are super easy to prepare, but it’s still a good meal.”

Meier said they try to have something for everyone – including offering sugar-free candies and no-sugar-added jams for those trying to avoid extra sugar. “We also have a wish list, so if there’s something that we don’t have, I’ll be glad to look for it,” she said.

The idea of opening Market at the Pines originated from the Meiers’ trips to the Amish communities of Arthur and Arcola in Illinois. Meier said the farm’s draft horse harnesses were repaired there, and she would always visit the small grocery shops when they visited.

“There are several Amish shops kind of like this – some are a little bigger and some are smaller, but it’s something I’ve always enjoyed,” she said. “Anytime we go on vacation, I try to find a little country store like this.”

When Meier retired from the University of Missouri Extension last year in April, construction began on the market next to the existing Christmas shop on the farm. “I thought, if I was going to do this, now is the time,” Meier said. “This is kind of my IRA, but we are having a good time and I am loving it.”

Construction on the building, which was done primarily by the Meier family and their friends, was completed last year in September before they had to take a break for the Christmas season. Meier said they went back to work in January to finish the shelves and other interior work.

“We built it from the ground up,” she said. “I was the apprentice who had a lot to learn, but it’s been a wonderful experience.”

The Market at the Pines will be open most of the year, unlike the Christmas tree field and Christmas shop located on the farm. The market will be open from March to December every year, taking off every January and February.

Meier said she hopes to open the Christmas shop early this year, opening in October instead of November, to allow visitors to visit both shops this fall. The Christmas trees go on sale the Friday after Thanksgiving.

“We just finished our 33rd tree selling season,” Meier said. “We have 22 acres of trees now, so it has grown tremendously. We’ve always said that November and December are the best times to be in business. This will be a little bit more of a challenge, but so far it has been great.”