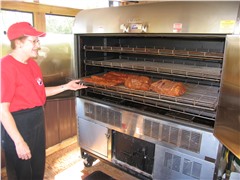 If the sweet, smoky smell of barbecue is in the air wafting your way from Fruitland, it’s probably coming from Hawg Pit BBQ, a family-oriented restaurant that opened this summer at 5598 Highway 61.

Hawg Pit BBQ is a dream come true for its owner, Kenny Seabaugh. “I always wanted to have a barbecue/meeting place,” he said. “Barbecue has always been my passion. I have a pit at my house and cook for friends and family. I’ve always liked barbecue.”

Seabaugh’s dream originated with frequent visits to the Owl Shanty, a favorite Fruitland restaurant and gathering place for 30 years. (It no longer exists.)

When he was a JHS student, Seabaugh worked after school at Kinder’ Grocery and Deli on Main Street in Jackson (now Stooges). There he learned the art of meat cutting and smoking a variety of meats.

Last year, the property that was Gerecke’s Small Engine in Fruitland became available, so Seabaugh bought it, demolished that structure and built Hog Pit BBQ.

Seabaugh’s assistant manager is Carolyn Burke. They graduated from JHS together in 1981. Carol won a gourmet cooking competition in sixth grade and went on to become a culinary chef. She returned to this area in 2009.

Seabaugh considered adding chicken but said, “To me, catfish outsells chicken.” Catfish is offered all week, not just on Fridays.

Although it’s a little out of the way, Seabaugh wanted to have his restaurant in Fruitland. “I grew up here in Fruitland,” he said. Being on Highway 61 means a lot of traffic passes by his restaurant every day—people working at Procter and Gamble, people who live in Fruitland and all the small towns north of there.

Seabaugh is hoping his menu will draw people from all over; they won’t mind driving a short distance to enjoy food they can’t get elsewhere.

“We do fried ribs,” hesaid. “Nobody’s ever heard of fried ribs. We call them porkcicle on a stick.”

The restaurant opened quietly June 1. Murphy’s Law went into effect, and it seemed that everything that could go wrong did that first day.

“We’ve been open for 10 weeks,” said Seabaugh. “We want to thank all our customers who have been in.”

Seabaugh and his staff listened to their first customers and have changed their menu to meet their desires. Some customers wanted salads, so they added pulled pork salads and chicken tender salads.

There is no drive-thru window at this time, but customers can call ahead for pick-up. The phone number is 204-4113.

Hawg Pit BBQ also sells pulled pork and sliced pork by the pound. Beef chili is sold year round, but when it gets cold this fall, the restaurant may add green chili made with pork to its menu.

“We’re not a fast-food restaurant,” said Seabaugh. “We are a sit-down, family oriented restaurant.” People order at the counter, and after their meal is cooked, the food is brought to them. The dining room seats 90. A separate party room is available for groups up to 20 and a deck out back will be available for outdoor dining in the future.

Kathy Carmody was hired as assistant manager and several high school students work part time. “We’ve got a great staff here,” Seabaugh said. “Our employees all work together. It’s a joint effort.” “We make all our own sauces,” said Burke. They range from “traditional” barbecue to “hot sriracha & chipotle” to “zing-in six spice.” If you want to buy a bottle to take home, you may. If you get a hankerin’ for some BBQ, head north on Highway 61 to Hawg Pit in Fruitland. It’s worth the short drive.