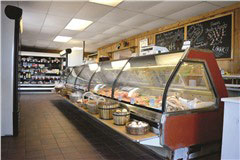 Emory’s Little Store at 3006 State Highway FF in Jackson is providing a one-stop shop for meals for the Fruitland community. Owner Anton Kotar, who has owned the shop since August 2018, said he is proud of what the store offers and hopes to expand the store in the future to include ready-to-eat meals.

The store offers beef, pork, chicken and fish products, as well as other groceries to make meals – including buns, seasonings, cheese, eggs and dairy products. Kotar added that they also try to have local produce in the store, when in season.

“If they come here, we try to send them home with at least three nights of meals completely,” Kotar said. “We look at easy meal recipes that everyone knows how to cook and are affordable.”

For example, the store offers meat for a stew, as well as a package to go with it featuring potatoes, carrots, green beans, corn, garlic and seasoning. The store has offered similar packages for roasts, meatballs and spaghetti.

“We try to be able to take care of the person who just wants to come in and wants spaghetti and meatballs, as well as carrying high-end ribeyes and porterhouses,” Kotar said. “When I got here, almost everything they were selling was cut about a half-inch think.”

The store now sells ribeyes, porterhouse and T-bones in the inch-and-a-half range. “If you’re trying to eat a ribeye at a mid-rare or a rare steak, there’s no way you can do that and get a good sear on it when it’s a half-inch thick,” he said.

Kotar became involved with the store and connecting meat-processing plant first as a customer, buying beef for his restaurant, Anton’s, in Kansas City, starting in 2012.

“I had a new concept for Anton’s, claiming to be the greenest restaurant in the county,” Kotar said. “We were bringing carcasses into the basement and breaking them down. I had five full-time butchers breaking down carcasses and preparing steaks.”

Kotar said they were the largest provider of grass-fed  beef out of an independently owned restaurant in the nation, moving 6,000 pounds a week through the restaurant alone.

“In Kansas City, we were bringing 10 animals a week through the building,” Kotar said. “That only provides you with 20 ribeyes or 20 primals. I needed to increase by almost 100 percent. I could have used the steaks out of 20 animals.”

“We are going to build a wall 8 feet back and build a whole kitchen back there, including a grill and a fryer,” Kotar said. He said he hopes to sell burgers and brats from the kitchen, and currently has a liquor license to sell beer, wine and hard liquor by the drink. He added that they also plan to put in an outdoor seating area and an awning over what used to be the dock.

The store is able to support itself, according to Kotar, and was able to help his Kansas City restaurant stay afloat when COVID-19 first hit this spring.

“When COVID-19 broke out and ground beef went to eight or nine bucks a pound in the local supermarkets here, people were coming down from St. Louis to buy hundreds of pounds of meat at a time,” he said.

Kotar said they didn’t raise their ground beef prices higher than $4.25 a pound, saying he didn’t want to do that to the neighborhood he serves. “If we can produce it and still make a profit at this price, why would we not? I’m not going to take advantage of them here.”